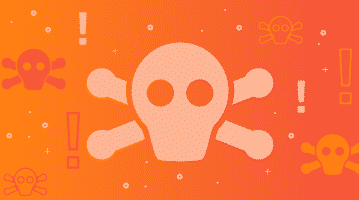 Oof. It’s been a rough year for ransomware attacks.

Small businesses across the globe paid more than $301 million to hackers last year. And the rate of attacks is expected to continue rising over the next two years.

Worse yet, most small businesses are still in the dark about the threat of ransomware. While some organizations are finally starting to take ransomware more seriously (usually because they’ve already been attacked), others are more vulnerable than ever.

A new report from Datto illustrates how ransomware has become a full-blown epidemic for businesses around the world. It’s not just WannaCry or NotPetya or GoldenEye. While those were the most high-profile (and singly destructive) attacks in 2017, many other strains continue to infiltrate businesses on a daily basis, locking up their data and grinding operations to a halt.

Below, we highlight some of the most disturbing stats in the Datto Ransomware Report with the hope that more businesses will begin reevaluating their business continuity solutions.

A quick primer on the Datto ransomware report

Findings from the Datto Ransomware report have been covered by several media organizations, including Forbes, TechRepublic and CSO, but few go into detail about how the report was created.

Officially, the report is titled: Datto’s State of the Channel: Ransomware Report. Datto is a provider of business continuity solutions and data-backup technology.

Key findings & trends: Not a good sign
Let’s start with some of the most eye-popping figures in Datto’s report. In case you had any questions about whether the ransomware situation was getting better, this should make it pretty clear.

What happens in an attack

Attacks are happening right now, as you read this. But how are businesses responding? Are they paying up? Are they calling the authorities, as the FBI recommends? Are they successfully retrieving their data?

Here’s what the research shows:

Where it hurts most

Want to know why a $500-$2,000 ransom payment isn’t a bad gamble for some businesses? Because when their business-critical data is gone, they’re losing a lot more money in downtime.

According to a previous Datto study, businesses lost an average of $8,581 per hour of downtime. Ouch.

Here’s how the losses really add up:

Ransomware knows no limits. It typically spreads by spam emails, often with bad links, malware-laced file attachments or phishing scams. These emails generally aren’t targeted to any particular business. They’re designed to reach as many inboxes as possible, based on addresses scraped from the Web (or pulled from the address books of other infected machines).

Locky, one of the most common strains of ransomware, sent 23 million emails in 24 hours, according to TechRepublic. And that’s only one strain.

As such, ransomware affects nearly every industry. However, some industries suffered more than others last year, according to the Datto ransomware report.

Here’s a breakdown of sectors and what percentage of them reported being attacked:

Why are businesses still so vulnerable?

The continued spread of ransomware begs the question: why aren’t more businesses doing more to protect themselves?

The biggest reason: businesses simply don’t understand the seriousness of the threat, if they know what ransomware is at all. Even businesses that are concerned about ransomware typically aren’t doing enough to protect themselves, according to their MSPs.

Let’s look at some key stats that illustrate this perfectly:

Businesses need a multilayered strategy to defend themselves against ransomware.

No single solution, such as employee training or anti-virus software, will provide complete protection. Businesses must employ a 360-degree approach, backed by a dependable backup and disaster recovery (BDR) system.

If you’re still not sure what such an approach might look like, consider these stats as a final takeaway:

For more information on how your company can defend against ransomware with today’s best data-protection technologies, contact our business continuity experts at Invenio IT. Request a free demo or contact us today by calling (646) 395-1170 or by emailing success@invenioIT.com.