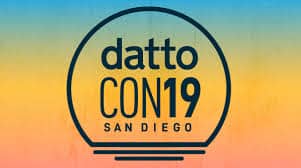 DattoCon19 just wrapped up in San Diego a couple weeks ago, and there’s plenty to talk about.

From the SIRIS 4 to the new “Cloud Continuity for PCs,” Datto announced more than 20 significant updates that every business should be excited about.

In case you missed it (you’ll be forgiven—I did too. My wife and I have our hands full with a brand new beautiful baby girl!), we’ve got you covered. Here’s what you need to know.

DattoCon is Datto’s annual convention, primarily intended for its large network of managed-service partners (MSPs), the independent IT professionals that help deploy Datto’s products for businesses around the world.

The annual event is designed to provide training for MSPs and equip them with various business-building education. But it’s also an opportunity for Datto to announce its biggest product updates of the year.

Datto refers to the event as “the largest open-ecosystem MSP-centric event in the channel,” and that’s not an overstatement. Nearly 3,000 MSPs attended DattoCon19 – the 7th year Datto has held the event – from June 17-19, 2019, at the Manchester Grand Hyatt in San Diego, California.

Datto will host its European version of the event in October: DattoCon19 Paris.

What You Missed: Highlights from DattoCon19

Okay, let’s get to the good stuff.

Datto announced nearly two dozen updates at the event, ranging from major product releases to small-but-significant enhancements to existing products. Over the next couple weeks, we’ll take a deeper dive into the “big stuff” like SIRIS 4 and Cloud Continuity for PCs. But for now, let’s run through some of the most exciting innovations and how they translate into stronger continuity for the businesses we protect.

The SIRIS 4 is the latest version of Datto’s flagship BC/DR appliance, which was last updated in 2016 with the SIRIS 3. Datto has completely revamped the SIRIS, making backups more resilient, improving the hardware and boosting virtualization speed.

·      The SIRIS 4 appliance is built with Intel’s Skylake and Cascade Lake CPUs, which have more cores, plus a dedicated write cache (SLOG). This will significantly improve the performance and speed of virtualizing backups and will also allow businesses to virtualize more agents. (Bonus: it will also improve the speed of backup verification.)

·      New self-healing ECC memory will reduce the rate of memory failure and provide even stronger protection against the risk of corrupted backups.

·      New internal cooling in the SIRIS 4 will result in better heat management and more efficient fan configurations, which will also make the appliance quieter.

·      Faster virtualization will allow businesses to boot their backups even more quickly after a data-loss event.

·      Stronger virtualization performance will also bring more stability and speed to the applications running on those virtual machines. It enables businesses to run their heavy-duty apps seamlessly and with fewer hiccups, so that critical operations can resume quickly after a disaster.

·      A lower risk of corrupted backups (combined with better backup verification) provides more assurance that backups will be viable when they’re needed.

Deploying a private cloud can be an expensive and complex undertaking for small businesses. And the task is even more challenging in industries like healthcare, financial services and government, where cloud continuity is a must but data mixing is a no-no. Datto’s new SIRIS Private solution addresses these challenges by providing a simple way to deploy SIRIS as a private cloud.

·      A SIRIS appliance is deployed locally and then connected to another SIRIS at a secondary site for replication and recovery.

·      This creates a self-contained BCDR solution that provides a secure and closed environment.

·      Businesses can keep their data self-contained on their own network, without sacrificing any of the benefits delivered by the Datto Cloud, like instant virtualization, and expansive restore options.

While we’re still on the subject of SIRIS, let’s take a quick look at Datto’s latest version of its all-flash BC/DR, the SIRIS X 1 and X 2 (aka the S4X1 & S4X2). These tiny devices pack a ton of backup power, and yet the form factor is now smaller than ever.

·      As with previous X series generations, these all-flash devices offer impressive speed and performance, at a cost that makes sense for smaller companies.

·      In my opinion, the small size of Datto’s S4X1 and S4X2 makes BC/DR appear more “accessible” to smaller businesses. It makes enterprise-grade data protection seem “easy” (spoiler: it is!), and that’s a good thing.

Okay, so this isn’t technically 100% new – it was formerly called Direct-to-Cloud – but it’s out of beta and will be a big deal for businesses of all sizes. Cloud Continuity allows for automatic cloud backups for each protected PC, without the need for an additional on-site BC/DR appliance.

·      Image-based, all-in-one backup solution for PCs: the Cloud Continuity agent sits on each protected PC and replicates data to the Datto Cloud (no local appliance needed).

·      Companies can restore individual files from PCs or the entire device image. They can also boot any protected PC remotely as a virtual machine.

·      Ensures that every PC (where many workers store critical files, whether intentionally or not) is being backed up, so that all data is protected no matter where it lives.

·      Users of Datto’s O365 SaaS protection can now get the AI-threat detection power of Vade Secure, a leader in predictive email defense for Office 365.

·      Stops email-based attacks in their tracks, eliminating threats before they can cause damage.

·      Advanced email filtering reduces the risk of data loss from cyberattack, thus reducing the need to restore data from backup (saving time for employees and their IT teams).

Datto unveiled its brand new line of E310 stiches, which is a complete redesign and replacement of its E Series. E310 is fully cloud-managed and loaded with new features designed to give businesses greater performance and flexibility in their network deployments.

·      Datto says the new design is built entirely on the feedback of MSPs and the businesses they serve.

·      New enhancements, plus the cloud-based management, helps simplify networking for MSPs, which results in better, faster service for the businesses they serve.

Datto RMM is the remote monitoring and management platform that MSPs use to manage and support their clients from afar. The platform already provided a simple, seamless way for MSPs to deliver first-class service to their clients, but it’s about to get even better:

·      New HTML5-based remote control technology will enable support technicians to securely remote control a device from any device or OS using just their browser, in less than 5 seconds.

·      Redesign of UI will offer refreshed dashboards that can be configured to fit the needs of each user.

·      A better RMM platform enables businesses to receive even better, faster service from their MSPs, no matter where they are.

·      Even if a support technician is traveling, on-site at another client’s location, or changing diapers in the nursery, they can provide rapid response to any of the businesses they serve, remotely, in a matter of seconds.

Lots of other exciting updates

These innovations are only a few highlights out of many additional updates that were announced at DattoCon19, including enhancements to Datto’s File Backup & Sync (Datto File Protection + Datto Workplace), new integrations for Datto Networking, Autotask PSA integrations and more.

Needless to say, we’re pretty excited, and we know our customers will be too.

Head over to Datto’s page to check out the full list of updates, and stay tuned in the coming weeks as we take an even closer look at some of these new innovations.

Take a tour of Datto’s BC/DR solutions to learn more about these updates and numerous other benefits. Request a free demo or contact our business continuity experts today at (646) 395-1170 or email success@invenioIT.com.