Datto Open Mesh: You Ain’t Seen Nothing Yet

One of the more exciting news stories in business continuity this year was the announcement of the Datto Open Mesh acquisition. The merger was widely hailed as a brilliant move that would benefit both Datto’s and Open Mesh’s huge customer bases around the world, as well as the managed service providers (MSPs) that serve them.

In the months since the acquisition, Datto has rapidly expanded its new Datto Networking suite of products (which it launched simultaneously with the Open Mesh merger). And just last week, Datto announced its new L-series switches for cloud-managed layer 2 functionality and Power over Ethernet (PoE) – a direct result of the collaboration between the two companies.

Today, we take a closer look at how the Datto Open Mesh acquisition went down, why it makes sense and what it could mean for companies like yours.

Filling a Gap in Business Continuity

Datto’s response, by itself, reveals something important about business continuity in IT: it’s not just about the data.

Disasters can impact your infrastructure in numerous ways beyond simply lost data:

Granted, if you’ve deployed a BC/DR device like the Datto SIRIS 3, you can be sure your data is safe in the cloud and accessible from any Internet-connected device. But you’ve still got your network infrastructure problems to resolve:

In both scenarios, you’re losing time and money with each minute that your network isn’t optimally restored. That’s regardless of the status of your data.

The point is this: A disruption to your network is a disruption to your business. Regardless of the scale of event, the impact comes at a cost. So it’s in your best interest to resolve any issue as quickly and efficiently as possible.

In recent years, Datto has established itself as a leader in business continuity solutions. So it made sense that the company would expand further beyond data and into network continuity. In 2015, Datto announced its DNA router with remote configuration capabilities and 4G LTE failover for “always connected networking.”

But that was just the first step toward its new 360-degree approach to business continuity.

Datto Open Mesh: A Closer Look at the Acquisition

On January 31, 2017, Datto and Open Mesh issued joint releases announcing the acquisition, which Datto said would further “Datto’s vision to provide the most comprehensive set of data protection solutions” to organizations worldwide.

Here’s a brief refresher on both companies, which illustrates why the merger makes sense:

While we don’t know how long the Datto Open Mesh plan had been in the works, it’s clear that Datto had already been thinking beyond the merger itself.

While Open Mesh continues to operate out of its Portland headquarters as a subsidiary of Datto, the acquisition enabled Datto to simultaneously launch its new Datto Networking business: “a complete collection of high performance, fully integrated networking solutions” that includes the Datto DNA and the Open Mesh-created switches and WiFi access points.

What the founders had to say

Understandably, for two successful, industry-disrupting companies of their size, the acquisition was a big deal—one that would have implications for the companies’ massive distributor networks, their customers and their employees.

Here is how the founders of the two companies framed the merger in their respective announcements:

It’s not just about continuity, either

By joining forces with Open Mesh, Datto is becoming more of an exclusive, one-stop shop for IT infrastructure. (Or, more accurately, the company is helping its MSP partners become that one-stop shop.)

Companies who already trust Datto for its backup technologies are likely to trust the same brand for its networking components (especially at the advice of their MSPs, and especially if Datto’s products can make their infrastructure smarter, more efficient and affordable).

But also, a company doesn’t have to know the Datto name to see the value of Datto Networking.

Consider, for example, a new hotel that wants to deploy dependable WiFi across the location as quickly and efficiently as possible. The hotel’s MSP is likely to recommend Datto, even if the hotel isn’t necessarily concerned with business continuity solutions. That’s because of the power of the technology itself and because this new approach to managed networking is simpler, more efficient and more cost-effective than the old way of selecting hardware from a range of providers and painstakingly managing it all on-site.

Talk nerdy to me

Wait a second. So, what is it about Open Mesh’s products that Datto found so special?

Let’s take a closer look at the cloud-managed gear we mentioned above.

It’s only been eight months since the Datto Open Mesh acquisition, so you can bet we’ll see more fruits of this partnership in the months and years ahead.

Stay tuned for more updates at http://invenioit.com/blog/. And for more information on Datto’s suite of business continuity and managed networking solutions, contact Invenio IT at (646) 395-1170 or success@invenioIT.com. 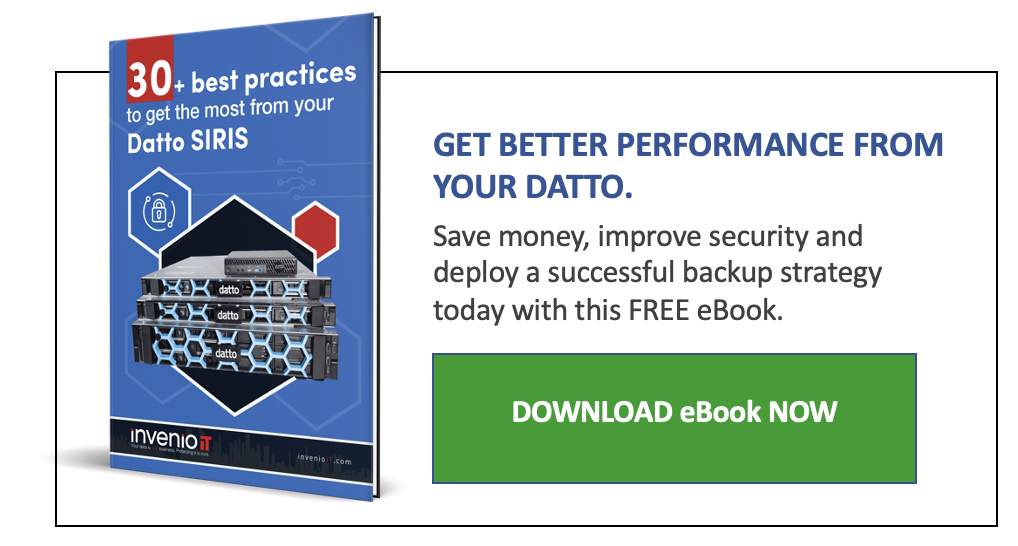