Why the Datto Mac Agent is Superior for Mac Backups 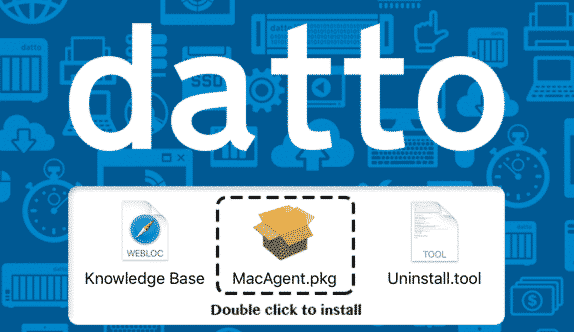 When the Datto Mac Agent came along in 2016, IT folks around the world breathed a sigh of relief. Finally, there was a more robust solution available for backing up Macs in business environments.

For years, the most common method of Mac backup was with tools that have come loaded on most Apple computers for the past decade or so. Most notably: Time Machine.

The issue with Time Machine (as well as other third-party cloning tools for Macs) is that backups are performed at the file level. Traditional file-level backups can pose a big problem for business continuity, because they’re slower, bulkier, less efficient, more taxing on computing resources, more prone to failure, and they take longer to restore.

Macs have become extremely common in business IT today. Some businesses use them exclusively; others have a mix of Mac and Windows machines on their networks. There’s no reason why any company should be settling for lower levels of data protection on their Macs today, especially when the risks are so great.

The Datto Mac Agent introduced a true block-level image backup solution—a first for the industry—and enabled businesses to back up their Mac computers with the best data protection available today.

Below, we take a closer look at the Datto agent for Mac, why it’s the go-to solution for backing up Macs, and some tips for deploying Datto BCDR solutions within your Mac environment.

If you already have a Datto appliance deployed (SIRIS or ALTO) and you’re ready to pair it with your Macs, then you’ll first need to download the agent, if you haven’t already.

Some limitations to keep in mind:

Now that you’ve downloaded the Datto Mac Agent, it’s time to install and configure. Follow these steps from Datto on how to complete a basic setup.

Above, we addressed some of the broader reasons why Mac’s built-in backup tool, Time Machine, is inadequate for business continuity. Let’s go a little deeper to uncover the reasons why Datto’s solution is infinitely better for backing up your data.

Integrity checks aren’t really a thing in Mac’s Time Machine tool. And we all know how vulnerable disk backups can be. Backups are often corrupted and prone to failure during the recovery process. The worst possible time to find out that your backup data is bad is immediately after a disaster.

As Datto explains, “Mac backup solutions are not quiesced, yielding unpredictable captures of open applications.” Additionally, “Local-only backups mean that site loss remains a risk, which leads to even more risk as physical drives are rotated and transported off-site.”

Datto enables a completely different approach—one that’s smarter, more stable and more efficient. For starters, real point-in-time snapshots are facilitated for the protected volumes by redirecting writes as the backup is initiated, and then “flushing out to disk once it completes.”

Then, other Datto features go to work to enhance data protection, like ZFS’s multiple levels of checksumming and integrity checks that detect and pro-actively repair what’s known as “bit rot.” RAID protection also helps to eliminate the risk of on-site backup drive failure. Additionally, backups are automatically protected in the Datto Cloud.

Since the backups are image-based, this enables far greater speed for both backups and recoveries. Faster backups also means you can back up more often. So you can drastically lower your recovery point objective and thus significantly reduce your data loss after a critical event.

Long-term backup retention is pretty much nonexistent in Time Machine, and you have virtually no control over how long backups are retained.

By default, Time Machine retains backups on a weekly and monthly basis. When a new backup is performed, old backups are automatically pruned if there’s not enough space available.

But what if the files you need were deleted months or even years ago? What if it was a critical folder of data? Well, even if Time Machine backed up those files originally, they’re probably long gone now.

With Datto, you have full control over how long backups are retained on-site. And don’t forget that your backups are also archived indefinitely in the Datto Cloud. So even if you lost important data years ago, it’s always recoverable.

We said before that backups with Time Machine are “bulky.” By that, we’re talking about both the size of the backups and the inefficiency of how they’re stored.

Prior to the Datto Mac Agent, pretty much all Mac backups happened at the file level, which is wasteful on storage and computing resources.

As Datto explains: “Many [Mac backup solutions] leverage HFS+ metadata, which limits incremental backups to file-level granularity. Any change to a file (contents, name, or folder location) results in the entire file needing to be backed up, often uncompressed.”

Some solutions are capable of sub-file updates, but they require the system to check the updated files for updates at the time of backup, thus putting even more unnecessary strain on computing resources (and making the backup take longer).

With Datto, changes are tracked at the block level, requiring backups only when changes occur at the sub-file level and only updated metadata. Additionally, backup storage is compressed and the data is deduplicated across backups with Datto’s Inverse Chain Technology.

When you use Datto’s Mac Agent with an appliance like SIRIS, backup storage is reduced by over 75% vs. with Apple Time Machine paired with an external drive (and with Datto, the data protection is far better too).

There’s no denying it. Time Machine backups are as slow as molasses. But you can’t blame the software necessarily; it’s simply not designed for the kind of accelerated backup process that’s possible with Datto.

Part of the slowness of Time Machine comes from the way it prunes old backups when storage meets capacity, as mentioned above. But on top of that, you’re just not getting the kind of raw processing power that’s possible with a dedicated backup appliance.

We all know that disasters come in many forms. Sometimes it’s a server room being flooded with water from the fire suppression system. Other times it’s Jim from HR who just deleted a super-important spreadsheet.

With Datto’s Mac backup solution, you can recover and restore your data however you need it: at the file level or a full bare metal recovery (BMR).

Here’s what Datto has to say:

“Datto uses a consistent disk image as the recovery point for BMR (as opposed to a synthesized image), reducing restore times by more than 50%. If there is a site loss, file restores and image BMRs can be done directly and immediately from the Datto Cloud.”

If you’re used to mailing drives to/from other sites, then you know that Datto’s cloud solution is infinitely better for time and cost.

Your Datto can also be used as a cloning solution for larger Mac deployments because of the image-based backups, guaranteeing that every Mac has the protection it needs on the day it’s deployed.

It would be unfair to call Apple’s Time Machine a “terrible” backup solution for businesses, because again that’s not what it was designed for. Time Machine, and other third-party solutions for Mac backup, are largely designed for consumers. So, for the vast majority of businesses using Macs, that means needing a more robust backup solution that meets their continuity objectives.

Datto enables local and remote backup for a fleet of hundreds of Macs with no need to rotate a single disk offsite. The Mac Agent is critical to this strategy, enabling centralized administration of backup schedules and backup storage, as well as fleet management, email alerting, and auditing already available from Datto.

See how your business can benefit from the protection of Datto BCDR solutions for Mac, Windows and Linux-based systems. Request a free demo or contact Invenio IT today by calling (646) 395-1170 or by emailing success@invenioIT.com.